Mystery Babylon by George Hawtin. There are many mysteries spoken of in the word of God. They are called mysteries because no other word would adequately describe them. We read of the mystery of godliness, the mystery of iniquity, the mystery of the translation of the saints in Christ, the mystery of the kingdom, and many others. Again we read of “Mystery, Babylon the Great, Mother of harlots and abominations of the earth.” It has always been a trait of human nature to want to delve in mysteries, but there are many mysteries, which have scarcely ever been noticed. Indeed, it is completely impossible to fathom them in any degree except by the revelation of the Holy Spirit.

It is my purpose just now to write about that one great mystery which is called Mystery Babylon, but for the sake of making ourselves acquainted with the thought of mystery, let us consider briefly one or two of the other mysteries, which per-haps are more readily understandable.

“Great is the mystery of godliness,” wrote Paul. “God was manifest in the flesh, justified in the Spirit, seen of angels, preached unto the Gentiles, received up into glory.” There are many mysterious things about godliness that even godly men can never understand. What strange mysterious element is there to godliness that keeps a man pressing relentlessly on toward an invisible mark when both friend and foe tell him he is a fool to continue thus wasting his life and his time, when his manner of living brings him nothing but persecution, tribulation, lone-someness and friendlessness? The inner urge of god-liness that makes him endure a cross, despise shame, go to prison or to the stake, scoff at tribulation, and count every loss to himself a gain for Christ is in itself nothing less than a fabulous mystery, a mystery that can never be explained in this world and scarcely in the world to come. The glory of this mystery is worthy to be written on pages of silver with ink of gold, but none of earth’s philosophers could trace with a golden pen such sage, deathless truth as lies hidden in the “mystery of godliness.” Only with the finger of God can such truth be written and then alone on pages not less worthy than the incor-ruptible heart. Great is the mystery that God was manifest in the flesh, that God was justified in the Spirit, that God was preached unto the Gentiles, and that God was received up into glory.

Above is an excerpt from the free eBook below “Mystery Babylon” by George Hawtin. 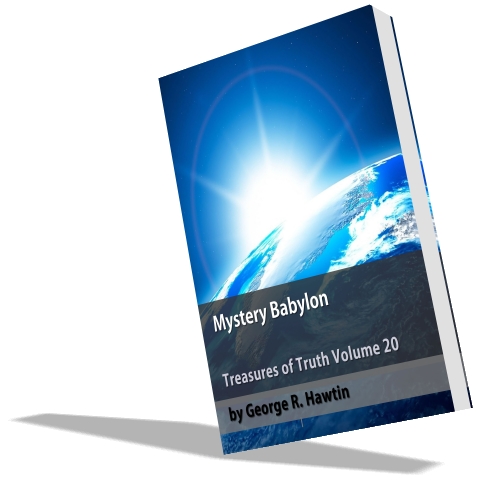 Treasures of Truth Volume 20 Free Edition - eBook
Treasures of Truth Volume 20 - 80 Page PDF eBook by George R Hawtin - Widely acknowledged as a “father of the latter rain movement,” along with his brothers Ernest and Phillip, George Hawtin was a popular teacher and expositor, traveling and teaching Bible Truth both near and far. Whereas the “early rain” was acknowledged to be the great and miraculous outpouring of the Holy Spirit on the day of Pentecost, as described so vividly in the second chapter of the Acts of the Apostles, there was another great outpouring and awakening which occurred in the early 1900’s in the United States, with the major centres being Topeka, Kansas and Los Angeles, California. - THIS IS A DIGITAL PRODUCT ONLY.