Our So Great Salvation by George Hawtin. This little book is not intended to be an exhaustive study of the Epistle to the Hebrews, but only an attempt to glean some of the fathomless truth contained in four of its chapters: Chap-ters 1, 2, 3, and 11. An exhaustive study of that which is totally inexhaustible is an impossibility. Could we put the ocean into a teacup, then might we hope to exhaust God’s word. If we can but unlock the door to this vast treasure house of our Father’s illimitable supply, we will not have entirely failed.

When the apostle states that the Lord Jesus Christ is the brightness of God’s glory and the express image of His person, how may mortal man, whose eyes have never beheld such brightness or such express image, describe or comprehend Him? The noble and inspired attempts of Ezekiel to portray the vision he saw in chapter one of his book, or of Isaiah in chapter six of his book, or of Daniel in chapter seven of his, leave them as well as ourselves awe struck and amazed, des-pairing the inability of earthly similarities to explain the majes-ty of celestial revelation. Simon Peter, with his friends James and John, did not attempt to relate the story of the transfigura-tion, that left them as dead men. The story is told by Matthew, a man who was not actually on the scene when it happened. Nor could John explain the effulgent glory of the revelation of the fullness of Christ, which he saw in his Patmos vision, ex-cept by the use of earthly similarities. In the light of these sub-lime and heavenly revelations we may for the present find it necessary to follow the example of Paul, who, after being caught up into the third heaven, declared, “I saw unspeakable things that are unlawful for a man to utter.” Surely the dullest mind should be able to understand that that which is indescrib-able cannot be described and that which is unspeakable cannot be spoken.

Above is an excerpt from the free eBook below “Our So Great Salvation” by George Hawtin. 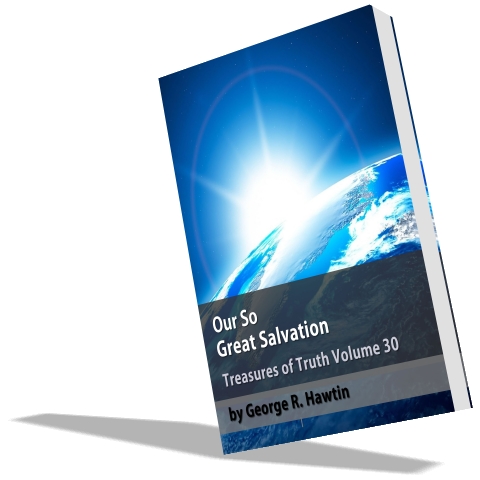 Treasures of Truth Volume 30 Free Edition - PDF eBook
Treasures of Truth Volume 30 - 93 Page PDF eBook by George R Hawtin - Widely acknowledged as a “father of the latter rain movement,” along with his brothers Ernest and Phillip, George Hawtin was a popular teacher and expositor, traveling and teaching Bible Truth both near and far. Whereas the “early rain” was acknowledged to be the great and miraculous outpouring of the Holy Spirit on the day of Pentecost, as described so vividly in the second chapter of the Acts of the Apostles, there was another great outpouring and awakening which occurred in the early 1900’s in the United States, with the major centres being Topeka, Kansas and Los Angeles, California. - THIS IS A DIGITAL PRODUCT ONLY.