Watchman What of the Night by George R Hawtin. There is almost universal conviction today that we are now living in the end of the age. We humans soon learn that, as the evening approaches, shadows begin to lengthen, casting the specter of the coming night across the land. So also the lengthening shadows of this age of grace herald the approach of the black night of tribulation, which will be followed by the kingdom day.

When our Lord Jesus Christ was here, He often marveled at the ignorance and stupidity of the people. He was appalled at the unbelief of His own people, but sometimes marveled at the faith of Roman, Syrophoenician, or Samaritan. He foresaw a day in which strangers would come from the north, the south, the east, and the west to sit down with Abraham, Isaac, and Jacob in the kingdom of God, but His own people would be cast out. There is no royal road to the kingdom of God, but only the pathway of faith. No privileged people walk this way, but only obedient sons. There are no special helps for the laggard, no easier paths for those who fear hardship, nor any quicker way for the impatient. He reminds the faint-hearted,

“My Son, do not think lightly of the Lord’s discipline, and do not faint when He corrects you; for those whom the Lord loves He disciplines, and He scourges every son whom He acknowledges. The sufferings that you are enduring are for your discipline. God is dealing with you as with sons: for what son is there whom his father does not discipline? And if you are left without discipline, of which every true son has had a share, that shows that you are bastards, and not true sons.” Heb. 12:5-7. (Weymouth). 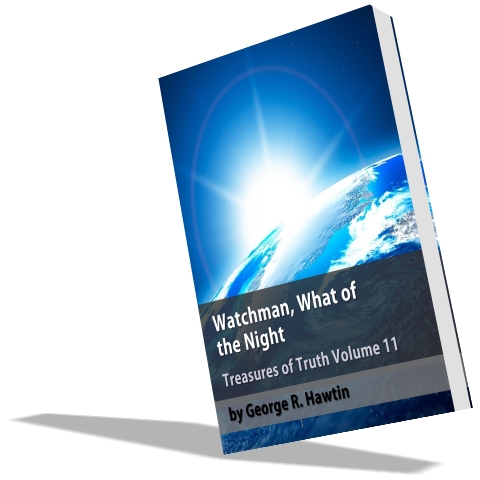 Treasures of Truth Volume 11 Free Edition - PDF eBook
Treasures of Truth Volume 11 - 104 Page PDF eBook by George R Hawtin - Widely acknowledged as a “father of the latter rain movement,” along with his brothers Ernest and Phillip, George Hawtin was a popular teacher and expositor, traveling and teaching Bible Truth both near and far. Whereas the “early rain” was acknowledged to be the great and miraculous outpouring of the Holy Spirit on the day of Pentecost, as described so vividly in the second chapter of the Acts of the Apostles, there was another great outpouring and awakening which occurred in the early 1900’s in the United States, with the major centres being Topeka, Kansas and Los Angeles, California. - THIS IS A DIGITAL PRODUCT ONLY.