Seven Baskets Full by George Hawtin. The seven chapters of this book are not intended to com-plement each other in the development of one theme. Each chapter has its own theme and we hope it will present the reader with much food for thought and meditation. Thus the title, Seven Baskets Full, is borrowed from the miracle of the loaves and fishes as recorded in Matt. 15:37.

It is of great importance that the multitude be fed, but the throng is always inclined to leave as inedible those precious fragments that are in truth strong meat to the maturing sons of God. We are living in an hour of great importance. Let us cast no fragment away nor neglect anything that we know to be truth. No word from God is unimportant; neither is it the right of any man to pick and choose between truth he likes and truth he dislikes. Those who eat what they like and discard the frag-ment can never be called either people of faith or lovers of truth.

The prophet Malachi was sent by God to preach to the rem-nant of Israel who had returned from the captivity of Babylon. It was indeed a grave and troublesome time for them, for, though they had followed Ezra and Nehemiah out of the bond-age, sorrow, and night of their captivity, even the blindest men can see that there was not a spirit of national revival among them by any means. The Spirit of God had burdened many with a great longing to leave Babylon and return to Israel now that the opportunity was afforded them, but though many had will-ingly left behind all they possessed in that kingdom of captivity to return in hope to their native land, the evidence suggests that only a very few of them had any true understanding or de-light in the things of God. Perhaps it is too much to expect that a people who had been in captivity for a period of seventy years, deprived of their worship and forced into the corruption and idolatry of the Babylonians, would have much understand-ing of the plans and purposes of the true God. Those brave souls who follow the true God regardless of Baal or the gods of Pharaoh or Nebuchadnezzar are always in the infinitesimal mi-nority. God never leaves Himself without a witness. He always has His remnant who has never bowed a head nor bent a knee either to Baal or to any of earth’s systems. We may have to spend days in travel to reach them, for they are always scat-tered to the four winds, unrecognized by the world and fre-quently unknown to each other as were the seven thousand in Elijah’s day.

Above is an excerpt from the free eBook below “Seven Baskets Full” by George Hawtin. 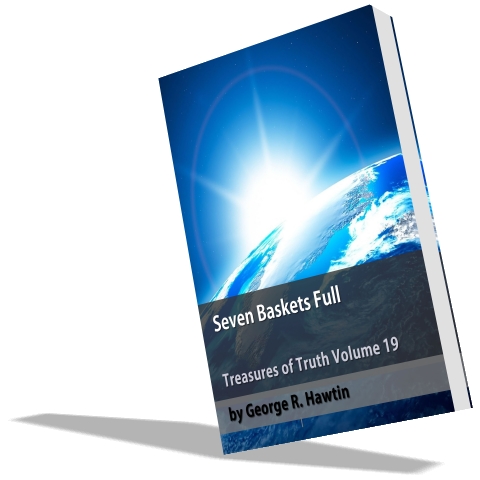 Treasures of Truth Volume 19 Free Edition - PDF eBook
Treasures of Truth Volume 19 - 111 Page PDF eBook by George R Hawtin - Widely acknowledged as a “father of the latter rain movement,” along with his brothers Ernest and Phillip, George Hawtin was a popular teacher and expositor, traveling and teaching Bible Truth both near and far. Whereas the “early rain” was acknowledged to be the great and miraculous outpouring of the Holy Spirit on the day of Pentecost, as described so vividly in the second chapter of the Acts of the Apostles, there was another great outpouring and awakening which occurred in the early 1900’s in the United States, with the major centres being Topeka, Kansas and Los Angeles, California. - THIS IS A DIGITAL PRODUCT ONLY.