God’s Great Family of Son’s by George R Hawtin: So many truths come pouring into the soul that there seems to be a lack both of time and of ability to write them. We must indeed be rushing rapidly to the close of this age that we call the Dispensation of Grace. The same glorious sun which set in turn upon the successive dispensational days of Innocence, Human Government, Conscience, Promise, and Law is now extending its lengthening shadows across the harvest fields of the dispensation of Grace.

There was a time when the Pharisees came to Jesus seeking a sign from Him that would prove that He was the Son of God. It is a surprising fact that this same question was repeated at least twice in the Gospel of Matthew. (Matt. 12:38, 39 and 16:1-4) Both times they asked for a sign and on each occasion, He told them that the only sign that would be given was the sign of Himself, that as Jonah was three days and three nights in the belly of the whale so also should He be three days and three nights in the heart of the earth.

It seems to me that for centuries our eyes have been kept holden to many of the great truths of the scripture. We have read and reread the Bible, usually taking for granted that we understood perfectly what was written, and frequently just reading over the passages and noticing little or nothing of their message. I do not think we should be overly concerned about this lack of understanding, but we should remember that God never reveals anything to anybody until He is ready to reveal it, and He is never ready to reveal anything until the time has come to prepare for that great event which He is about to accomplish.

For centuries Israel had looked for the coming of the Messiah until their eyes were dim with watching, but who among them all had even a hazy idea of how that coming would be ac-complished. They did not expect a virgin birth; they did not ‘expect a lowly birth; they did not expect a despised and re-jected man nor a man at variance with their established creeds. They did not expect a crucifixion, a resurrection, or ascension to heaven. All these things were contrary to their expectations and their long-established beliefs; consequently, they rejected Him. I suppose that Mary was the first person in all Israel to have the wonder of the virgin birth explained to her and that less than a year before the great event was to transpire. 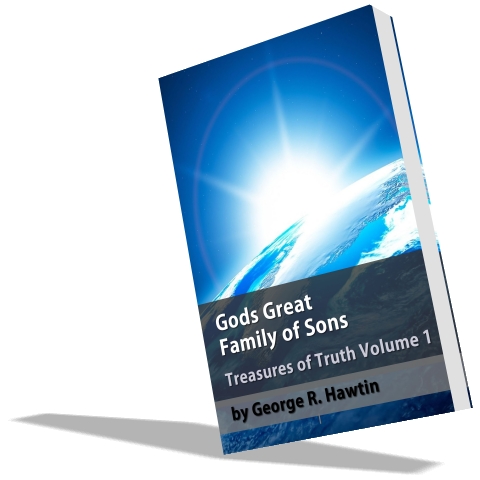 Treasures of Truth Volume 1 Free Edition - PDF eBook
Treasures of Truth Volume 1 - 100 page PDF eBook by George R Hawtin - Widely acknowledged as a “father of the latter rain movement,” along with his brothers Ernest and Phillip, George Hawtin was a popular teacher and expositor, traveling and teaching Bible Truth both near and far. Whereas the “early rain” was acknowledged to be the great and miraculous outpouring of the Holy Spirit on the day of Pentecost, as described so vividly in the second chapter of the Acts of the Apostles, there was another great outpouring and awakening which occurred in the early 1900’s in the United States, with the major centres being Topeka, Kansas and Los Angeles, California. - THIS IS A DIGITAL PRODUCT ONLY.