From Death to Life by George Hawtin. “Feed My sheep” was the commandment Jesus gave to Peter. There was but one commandment left to be given and it was the all important one, “Follow thou Me.” There is beautiful harmony between these two commandments because there is no possible way by which a man can feed the flock of God if he himself is following Christ afar off.

The scriptures record that, on the night when Jesus was betrayed and the howling, bloodthirsty rabble came to seize Him and to take Him captive, a certain brave man drew his sword in defense of his Master, smiting the servant of the high priest and cutting off his ear. Matt. 26:51. Each of the four gospel writers bear record of this incident, but John alone identifies the sword wielding man as none other than Simon Peter, say-ing, “Then Simon Peter, having a sword, drew it, and smote the high priest’s servant, and cut off his right ear.” John 18:10. The servant’s name was Malchus.

Simon Peter was no dastard in war. The fiery nature of his natural man was both ready and willing to face overwhelming and fearful odds. The mob who had come to take Jesus were armed men with swords and staves, determined to end forev-er the works of God’s Christ. Matthew described the mob sce-ne in these words: “And while He yet spake, lo, Judas, one of the twelve, came, and with him a great multitude with swords and staves, from the chief priests and elders of the people.” Matt. 26:47.

Above is an excerpt from the free eBook below “From Death to Life” by George Hawtin. 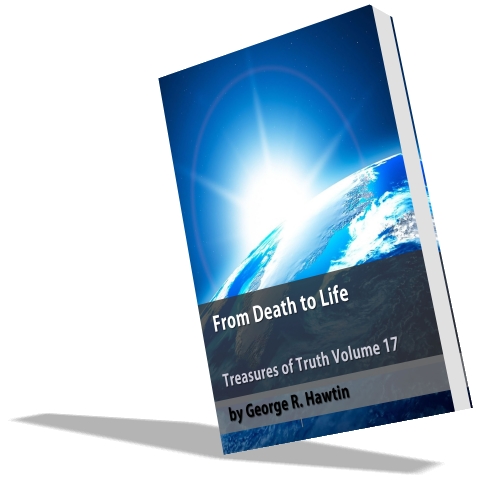 Treasures of Truth Volume 17 Free Edition - PDF eBook
Treasures of Truth Volume 17 - 88 Page PDF eBook by George R Hawtin - Widely acknowledged as a “father of the latter rain movement,” along with his brothers Ernest and Phillip, George Hawtin was a popular teacher and expositor, traveling and teaching Bible Truth both near and far. Whereas the “early rain” was acknowledged to be the great and miraculous outpouring of the Holy Spirit on the day of Pentecost, as described so vividly in the second chapter of the Acts of the Apostles, there was another great outpouring and awakening which occurred in the early 1900’s in the United States, with the major centres being Topeka, Kansas and Los Angeles, California. - THIS IS A DIGITAL PRODUCT ONLY.