A Closer Look at the Rapture: In the early 1950’s, God started dealing with Bro Bill Britton concerning the “Rapture of the Church”. He just could not see it the way the traditional churches were teaching it. There were many things that God was showing him in the Scripture that was going against the grain in the denomination where he ministered. In 1957, Bill Britton shared his vision that the Lord had given him concerning the Body of Christ and the end times. He was not encouraged by the ones he shared this with.

When the Lord told him he was going to have a writing ministry in 1950, he was excited. As the years passed and nothing yet being written, there were times of discouragement, but, he held onto the word of the Lord. In 1959, he wrote his first article, entitled, “The Weaker Vessel”. We sent it out to a mailing list of 500 people. As the Lord continued to deal with him concerning the Rapture he wrote two different tracts in and sent them out. They were “The Sounding of the Trumpets” and “One Shall Be Taken”.

He received much criticism from these two messages and also some encouragement. It seems that when the Lord speaks something to someone He also speaks the same thing to someone else. Later the next year he wrote a tract entitled “Day and Night”. The message seemed to be growing as the years passed and later he wrote another message entitled “Noah’s Ark”. The Scripture says, “As it was in the days of Noah”, a very interesting and thought provoking statement. By this time we were sending out over 3,000 on our mailing list. We started hearing from many people that God was showing the same thing to, but, were afraid to rock the boat. 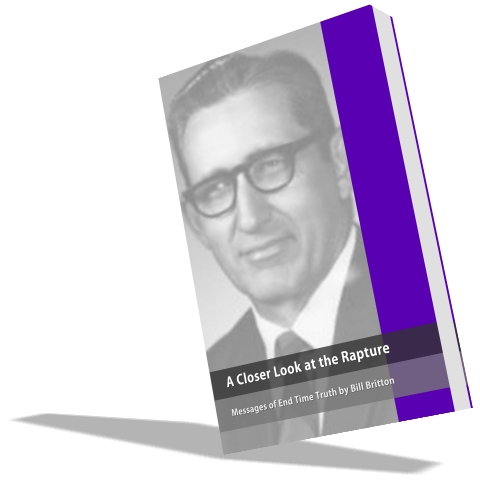 A Closer Look at the Rapture - PDF eBook
Free eBook - A Closer Look at the Rapture by Bill Brittton - These are the last days. This cannot be denied, and most people will agree that this is so. Men’s hearts are failing them for fear of what is coming upon the earth. The leaders of nations are meeting together to try to find a way out, but with little success. Much of the world lives in constant fear, while the rest of it is either in ignorance of world events or is trying to forget by means of pleasure, frantic activity or drugs. The outlook certainly is dark to say the least, from the viewpoint of the natural man. These things are vitally important to you. - THIS IS A DIGITAL PRODUCT ONLY.