The Book of the Revelation, The Overcomer, and the Apostasy by Daniel Sheppard USA – ISBN: 978-1705589328: T
here have been many attempts to bring a comprehensive under-standing to the Christian minds of the mysterious pictures seen in the book of Revelation. As a result, there are many differing views and interpretations. Which in turn some, by deduction, must be less than the truth – even some utterly and completely false, lead-ing some astray, blocking out the light of the truth. Truth, of course, should be the Christian’s goal in any reading of God’s Word. As Jesus said, “I am the truth.” To know truth is to know Christ and those who truly know Christ will know the truth.

The revelation of truth through Him have come to me slowly but consistently (“line upon line, here a little, there a little”), over the last 50 years beginning with the pouring out of His Spirit upon me when I was 18. Certainly, it was a fantastic revelation of Him-self when He chose me from among men to be called a son. I have persevered in the hope of my calling, in spite of great resistance and sacrifice. Early on I began to see beyond my peers into the deeper things, only to encounter regular push back, name calling and a rolling of the eyes. But I could not, would not conform. The pursuit of the truth was to me a treasure hunt that would never end. Looking for nuggets of truth, like treasure in a field of costly pearls. Each find would cost me something with those around me.

Conformity provides such an easy road to follow, but it is also known as the “broad path” and many will go that way. Just to be clear, those who sought my conformity in the past were not unbe-lievers or family or co-workers, but rather brothers and sisters who I shared a pew with and even those who stood behind the pulpit. It is difficult, as a sincere brother, to be rejected and scorned by your very own fellowship for what is perceived as questioning the authority of a pastor
and his teachings. I believe that questioning is healthy and nec-essary. Question every doctrine, every practice, every tradition. The truth is worth it – a precious treasure, costly pearls.

I have found many such treasures in The Revelation of Jesus Christ and will share them with you to question for yourself. Ask God if they are truth and He alone will guide you, just as He said, “ye shall receive power, after that the Holy Ghost is come upon you” and “when he, the Spirit of truth is come, he will guide you into all truth.” So seek…question…and listen.
As you may know, “all that will live godly in Christ Jesus shall suffer persecution.” Remember Jesus did not come to bring peace, but a sword. It was His goal to separate fact from fiction, the truth from deception. Those who find the truth will be rewarded with more truth. Truth begets truth, begets truth, begets truth…until all truth is known. It is His good pleasure to reveal truth to those who listen, for those who have ears to hear.

Those things that have been hidden are the focus of this writing as they have been during my Christian walk from the beginning. I will continue to pursue them until all be revealed. Please join me in this pursuit. If you are content with where you stand, all the mysteries of God will just be parables/stories to you. He will not reveal the hidden things except to those who follow Him closely:

“…because it is given unto you to know the mysteries of the kingdom of heaven, but to them it is not given. For whosoever hath, to him shall be given, and he shall have more abundance: but whosoever hath not, from him shall be taken away even that he hath. Therefore speak I to them in parables: because they seeing see not; and hearing they hear not, neither do they understand. And in them is fulfilled the prophecy of Esaias, which saith, by hearing ye shall hear, and shall not understand; and seeing ye shall see, and shall not perceive: For this people’s heart is waxed gross, and their ears are dull of hearing, and their eyes they have closed; lest at any time they should see with their eyes, and hear with their ears, and should understand with their heart, and should be converted, and I should heal them.” (Matthew 13:11-5)

The Christian world around us today looks much like the Jew-ish realm did then. Some pastors, theologians and writers of un-told myriads of books have taken the authority granted by their disciples to lead the flock and yet are not led by the Spirit but still, somehow, fill churches everywhere, every Sunday. This is why I haven’t been a part of any church for over 25 years. I have found, just as Paul did upon his first encounter with the leaders of the church in Jerusalem, that they “added nothing to me”. In oth-er words, Paul’s knowledge of the mysteries of God which he had come to understand, were not found in these people. They had a good start, but headed back down the path of tradition and the familiar, choking off the revelation of the Spirit and thus, true spir-ituality. Additionally, I believe that not only were they lacking in knowledge, but also in the anointing presence of the Spirit. Having regressed into carnality by observing and honoring days and cus-toms associated with their heritage and the law, they were dis-tracted and it diminished the work of the Spirit. The same Spirit that Paul was engaging in every day with passion, they had, over time, allowed to languish through the pleasing of the flesh and the appeasing of the practitioners of Messianic Judaism (even as it is called today). Their eyes were no longer seeing and their ears were no longer hearing and Paul, who had continued on in the Spirit of Christ, could see their failings. He went on to rebuke the party of Messianic Jews who came to him while imprisoned: “And when they agreed not among themselves, they departed, after that Paul had spoken one word, Well spake the Holy Ghost by Esaias the prophet unto our fathers, Saying, Go unto this people, and say, Hearing ye shall hear, and shall not understand; and seeing ye shall see, and not per-ceive: For the heart of this people is waxed gross, and their ears are dull of hearing, and their eyes have they closed; lest they should see with their eyes, and hear with their ears, and understand with their heart, and should be converted, and I should heal them. Be it known therefore unto you, that the salvation of God is sent unto the Gentiles, and that they will hear it.” (Acts 28:25-28)

Remember, Paul also confronted the fleshly pride and weakness of Peter and James in Antioch. They had become man pleasers, corrupted by appearances and fearful of the Messianic Jews. I have no man to please and have no man that I answer to. I answer only to Christ above. I too have found that no man has anything to add unto me. I am not anything like the church-pew-warming, Sunday-milk-toast-sermon-listening, shallow fellowship of the Spirit, Christian people that I meet. It also seems that I ap-pear to be a threat to the many pastors that I have met with, as they seem to believe that I am attempting to teach them, to in-struct them in the more perfect way by addressing the most seri-ous failings of their thinking and doctrine. I believe that someone has too. Herein I present to you some of these nuggets of truth that you might grow thereby. Some will require your serious soul searching beyond basic doctrine. But the time is at hand that we will have to give account of ourselves and be judged and rewarded. This is what He comes to do. He will not rapture out everyone who has ever gone to church and paid tithes as some teach. Read on and know the truth.

“THE BOOK OF THE REVELATION, THE OVERCOMER, AND THE APOSTASY”
AVAILABLE VERSIONS 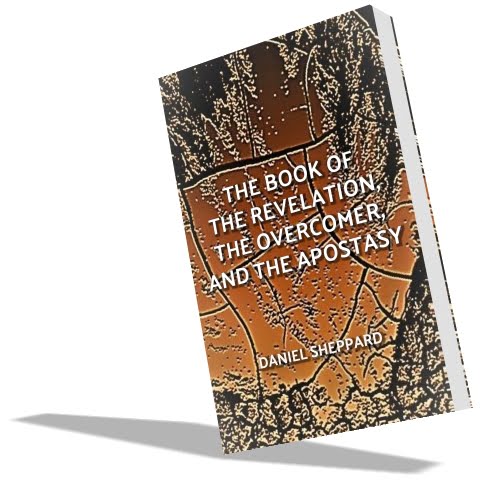