Tent to Temple by George H. Warnock, The purpose of this study, and the title itself, are intended to show how God would progressively move “from one tent to another” as He sought to lead His people into a higher relationship with Himself; and would then consummate His purposes by moving from the lowly “tent” to a glorious “Temple” as He took up His permanent habitation in the hearts of men. This had always been God’s plan, and the only reason He instituted and ordained previous temples was to provide for His people a place where they could draw nigh to Him, so that this place would become a “house of prayer” for all nations, and a means of grace whereby the inhabitants of the earth could discover the pathway to God until the greatest Temple of the ages would be revealed and manifested in the earth. And so it was fulfilled in the Lord Jesus who declared Himself to be the Temple of God in the earth. And then He showed us, through His holy apostles and prophets, how this Temple would be expanded and enlarged to embrace those who are the redeemed of the earth, and made to be “living stones” in that same Temple.

Because the original tents and temples that God ordained were intended to be a means of grace, and a revelation of His presence in the midst of His people, whenever the purpose of the temple was perverted to mean something that man had built “for the glory of God,” God did not hesitate to forsake it. Through Isaiah the prophet God saw fit to thunder forth some very awesome indictments against His people: “Do you think you have built Me a House? Do you really think I am hungry, and need to drink the blood of bullocks and eat the flesh of goats and lambs? Your hearts are perverted! Go cut off a dogs neck.., its all the same to Me! Or offer swines blood on My altar, if that is the thought of your rebellious hearts! What I am really looking for is not sacrifice and offering and temple and altar–I am really looking for the man who is poor and of a contrite spirit, and that trembleth at My Word!” (See Isa. 66:1-3) How applicable is such a denunciation to the religious world today! May God remove the scales from our eyes that we might know and be assured that the only temple God ever de-sired is now in the making, a holy Temple of the redeemed ones of the earth, a “habitation of God in the Spirit.”

And when God finds His home in the hearts of His re-deemed, He is totally at rest. 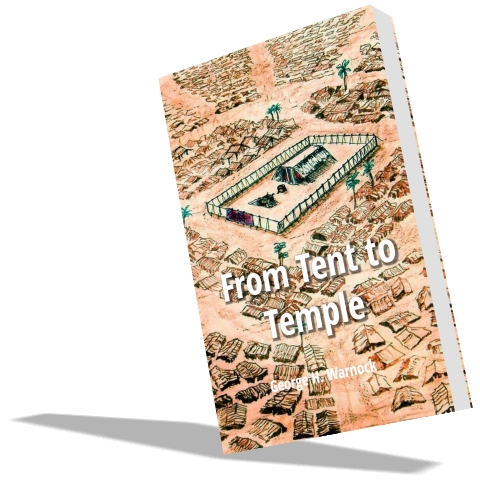 From Tent to Temple - PDF eBook
From Tent to Temple - 158 Page PDF eBook by George H Warnock - Truth runs deep in its flow, and is complex in its structure; but it is by no means complicated. Many would excuse themselves for not getting too deeply involved in Truth by saying, "Well, it is just too deep for me..." And so they just leave it alone. But neither knowledge nor intelligence are prerequisites for an appreciation of the deeper things of God. A fish is not considered to be highly intelligent, but it appreciates "depth" simply because it has a nature that longs for it. And because it has a nature that longs for it, God has given it the animal and physical capacity to enjoy it, as well as the rivers and lakes and streams and oceans to fulfill this inherent longing. And so the psalmist said, "Deep calleth unto deep at the noise of thy waterspouts" (Psa. 42:7). There is something "deep" in the nature of the fish that calls unto the "deep" in the oceans... because God put that longing there when He created it. - THIS IS A DIGITAL PRODUCT ONLY.