In a recent article titled ‘ Leadership in Business’ Harvard Biologist and Author E.O Wilson, who is also known for his belief in Humanism and Deism, is quoted as saying : “We are drowning in information, while starving for wisdom. The world henceforth will be run by synthesizers, people able to put together the right information at the right time, think critically about it, and make important choices wisely.”

In his book titled ‘Apostolic Strategies for Kingdom Reformation’ Series 3, Apostle Israel Onoriobe rightly notes that the Church has neglected her responsibility of Kingdom administration in the market place because of an incorrect assumption that it is not part of the purposes of God to rule in this area.

However the word of God in Revelation 11:15 reveals otherwise. God’s end goal is that the kingdoms of this world…including the market place…should become the kingdom’s of our Lord and of His Christ, so that He might reign over all things forever and ever. Amen.

As Apostle Israel states “The Kingdom of God will not be fully established in the earth if the market place is still dominated by principalities, demonic supremacy and their agents.”

Are we as a Church preparing “synthesizers” – Esthers, Josephs and Daniels – those who would use their minds creatively, and use information and technology available to stand in their place of governmental authority? 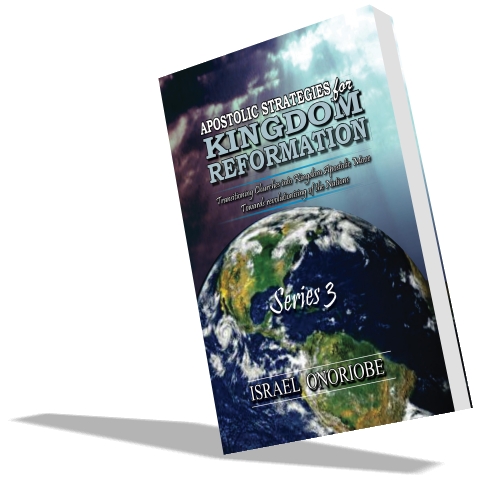 Apostolic Strategies for Kingdom Reformation Series 3 - PDF eBook
Apostolic Strategies for Kingdom Reformation Series 3 is a 124 page eBook: ISBN: 978-19775442-4-7 - On the one hand there is a continuing drumbeat declaring that the Lord is doing new things, and as a result there is the progressive revelation and unfolding of the purposes of God for this new season. On the other hand a fixation continues on topics of prosperity and destiny, unrelated to other mandatory kingdom realities. So the gap widens between the “haves” and the “have-not”. Men are swayed by the preaching of nice ditties for the entertainment of the hearers who are described by the Apostle Paul as the “itching ears crowd”. They quickly label these sermons as revelation. - THIS IS A DIGITAL PRODUCT ONLY.
Price: $7.95