According to the Purpose by George R. Hawtin. Long before there was a world or any man, God, almighty and all wise, planned every detail of the whole creation from start to finish. He not only planned each detail of the earth itself but with infinite wisdom He planned your life and mine before the foundations of the earth were laid. 2 Tim. 1:9. He planned the moment and place of our birth, the circumstances that were to prevail throughout our life, our down-sittings and up-risings, the trials and tribulations, the joys and sorrows that were to have their part in shaping us according to His purpose. He knows the appointed times and how many ages He will spend to bring us to the perfection He planned for us before the world began. I am perfectly aware that this is not church tradition. This is not what we were taught from our youth nor is this commonly accepted doctrine, but I affirm that this is truth according to the word of God, and it is also according to the true longing of our own spirit within us.

Did not Paul teach us that we were chosen in Him before the foundation of the world when he said to Timothy, “Be thou partaker of the afflictions of the gospel according to the power of God, who hath saved us and called us with an holy calling, not according to our works, but according to His own purpose and grace which was given us in Christ Jesus before the world began.” 2 Tim. 1:8-9. And then again, “Blessed be the God and Father of our Lord Jesus Christ, who hath blessed us with all spiritual blessing in heavenly places in Christ according as He hath chosen us in Him before the foundation of the world…” Eph. 1:3-4.

There will come an unbelievable transformation to your understanding, together with a fresh and vivid relationship with God, when the revelation of this truth dawns upon your soul, teaching you that God is the author and finisher of all things. He is the First and the Last. He is the Alpha and the Omega. Not only is it true that God was there at the beginning and will be there at the end, but also that God is the beginning and God is the end. He is the Alpha and He is the Omega (the first and last letters of the Greek alphabet) and consequently He is all the letters in between. “I am He that is and was and is to come.” All things, all things had their beginning in Him and all things, all things will have their end in Him.

Above is an excerpt from the free eBook below “According to the Purpose” by George R. Hawtin. 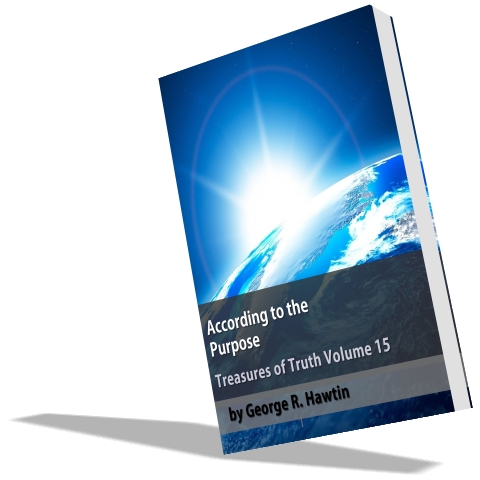 Treasures of Truth Volume 15 Free Edition - PDF eBook
Treasures of Truth Volume 15 - 48 Page PDF eBook by George R Hawtin - Widely acknowledged as a “father of the latter rain movement,” along with his brothers Ernest and Phillip, George Hawtin was a popular teacher and expositor, traveling and teaching Bible Truth both near and far. Whereas the “early rain” was acknowledged to be the great and miraculous outpouring of the Holy Spirit on the day of Pentecost, as described so vividly in the second chapter of the Acts of the Apostles, there was another great outpouring and awakening which occurred in the early 1900’s in the United States, with the major centres being Topeka, Kansas and Los Angeles, California. - THIS IS A DIGITAL PRODUCT ONLY.