3 Days at the River Jordan: Back in the year 2000 I was privileged to hear an excellent word being ministered about the River Jordan. From that time on during various seasons of my life, just before I awake out of my sleep. I find myself standing before a river that is too wide to cross and then I hear a voice saying “3 Days at the riverJordan are up”  The side of the river which I am standing is a desert type land scape with the dried up carcass of a bull in the sand, on the other side of the river is a beautiful jungle forrest filled with all manner of life, with lush green grass on the foreshore.

This became such a regular occurrence in the morning just before I awake, I finally gave into the voice. I began to seek and enquire after what it meant to me, but on enquiring, this word is not for me but for all of God’s people I believe “You Judge”.

Acts 2: 17‘And it shall come to pass in the last days, says God, That I will pour out of My Spirit on all flesh; Your sons and your daughters shall prophesy, Your young men shall see visions, Your old men shall dream dreams. 18 and on My menservants and on My maidservants
I will pour out My Spirit in those days; And they shall prophesy. 19 I will show wonders in heaven above And signs in the earth beneath: Blood and fire and vapor of smoke.
20 The sun shall be turned into darkness, And the moon into blood, Before the coming of the great and awesome day of the Lord. 21 And it shall come to pass That whoever calls on the name of the Lord Shall be saved.’

The River Jordan in the Word, speaks to me prophetically as a “Place of Change”.

When the Israelites crossed the Jordan in the old testament, things changed instantly. No more manna, giants in the land, warfare tactics had to change, open field warfare stopped, fortified city siege warfare began. Most importantly the Israelites”style of leadership” changed from the old to the new (Moses to Joshua). Things changed very quickly and the average Israelite had to adapt to the change quickly. They went from learning of God (with Moses) and His ways, too executing Gods will in the promise land under God’s supervision and direction (with Joshua).

Another of the bigger signs in the Word that the River Jordan is a place of change is when our Lord was baptised there and the Holy Spirit came upon him. Things changed for the whole earth on that day.

Interestedly enough though John the Baptist who (1) baptised Jesus (2) pronounced that the Kingdom was at hand (3) was not able to give up his personal ministry and follow Jesus,even though his ministry was given him of the Lord, he should have ceased his ministry immediately and followed Jesus.
He continued on in his ministry even though the Messiah was right in front of him, the King of the Kingdom was right in front of him and he continued in what he knew. I guess thats why his head was removed, thus ended the ministry of John the Baptist. Some of God’s people today should really think about that statement.
Are you continuing on in your ministry cycle today and ignoring what Jesus and the Kingdom are doing today?

Back to the great transition! Having arrived at the river Jordan the Israelites stopped in their journey. Time was no doubt needed for the leaders to organize the crossing and pass instructions on to the people. The delay also gave everyone an opportunity to get close and see the river after being in the desert for so long.
Now there was a strong current at that time due to the melting of the winter snows of Mount Hermon in the north of the region. They must have faltered and wondered at the seeming impossibility of the Jordan crossing in front of them.

When we study the first few chapters of the book of Joshua, I find  most interesting what the Lord said to Joshua “Say to the people” Joshua has always been referred to as Gods man of war, however what strikes me is he always had a heart for things of the spirit first. Mostly obedience to Gods direction first, then secondly warfare. There had been much preparation in the heart of Joshua in his early years. Many of his life lessons were to do with being humbly obedient and serving those in authority that God had placed over him. (Take note Gods people)

As you can see in the Word the Lord gave Joshua specific commands to give the officers, but he actually added something from his own heart when he spoke to the people:

This is what he said, not what the Lord had in fact instructed him to say.

Joshua 1: 10 Then Joshua commanded the officers of the people, saying, 11“Pass through the camp and command the people, saying, ‘Prepare provisions for yourselves, for within three days you will cross over this Jordan, to go in to possess the land which the LORD your God is giving you to possess.”

Joshua 3:5 And Joshua said to the people, “Sanctify yourselves, for tomorrow the LORD will do wonders among you.” 6 Then Joshua spoke to the priests, saying, “Take up the Ark of the Covenant and cross over before the people.”

It would have been more correct for him to say, and the people would have probably understood better if he said “Sharpen your swords, get your shields ready, we are going to war” But no not Joshua, he told the people to “Sanctify Themselves”.

Bretheren there is vast, awesome and magnificent change coming to Church very soon. Things are going to change so dramatically and be not what we are used to. The current form in which we the Church finds its self is mostly unprepared for what is coming. Most of, and if not all current church leadership and more mature Christians will not cope with the change that is coming. Many will be offended by some of the instructions that the Lord is going to give new leaders amongst his people, those who have been prepared with a sensitive ear to His voice.

When the hardly known servant comes with a powerful word of authority and direction, then God’s people will take notice, and a pure undefiled word of God is going to come from their mouth.  It will offend many of the religious types such as it did the Pharisees. This will cause a great rift in current church leadership. Many will be offended and call the truly anointed ones, not of God, mostly because of shady back grounds.

But it will be God that will appoint and call them forth, call them forth just like Moses the murderer, King David the adulterer and Paul of Tarsus the persecutor. In the end it will all come out in the wash and the church will go on like never before in great power and new style of leadership and structure. In fact a new vibrant Kingdom style leadership is going to be established as the Lord has ordained.

My hearts cry and prayer for God’s people in Australia at this moment is they would be first ready for the change. The Lord is going to bring forth a new style of ordained leader. These new leaders will have been prepared with a heart for earthly dominion, rather than being in a hurry to get everyone to heaven.

More recently now in year 2014 just before I awake, I find myself in water up to my neck swimming across a river. I have realised after some time that this an extension of my older dream. I am almost at the other side of the river. I am hearing the voice of Joshua again in the early mornings:

The 3 days at the river Jordan are up, hear well God’s people the command is again going through the current spiritual place were the body of Christ is camped, “Sanctify Yourselves” for the mighty and great things of God cannot be achieved with out consecration. It is now the third day and the priests must lead the way, take the burden of the manifest Glory on your shoulders and cross over.

THE FORMAL SENSE OF SANCTIFY.
Sanctification ordinarily means that hallowing of the Christian believer by which he is freed from sin and enabled to realize the will of God in his life. This is not, however, the first or common meaning in the Scriptures. To sanctify means to make holy, that is, to separate from the world and its ways and consecrate to God.

2 Peter 3: 8 But, beloved, do not forget this one thing, that with the Lord one day is as a thousand years, and a thousand years as one day. 9 The Lord is not slack concerning His promise, as some count slackness, but
is long suffering toward us, not willing that any should perish but that all should come to repentance.

Hosea 6: 1 Come, and let us return to the LORD; For He has torn, but He will heal us; He has stricken, but He will bind us up. 2 After two days He will revive us; On the third day He will raise us up, That we may live in His sight. 3 Let us know, Let us pursue the knowledge of the LORD. His going forth is established as the morning; He will come to us like the rain, Like the latter and former rain to the earth.

Well Im not sure what season others believe we are in, I believe we are about to see a big change amongst God’s people for the better. Lets believe an inheritance just in front us after 3 Days at the River Jordan.

Ephesians 1:17 that the God of our Lord Jesus Christ, the Father of glory, may give to you the spirit of wisdom and revelation in the knowledge of Him, 18 the eyes of your understanding being enlightened; that you may know what is the hope of His calling, what are the riches of the glory of His inheritance in the saints, 19 and what is the exceeding greatness of His power toward us who believe, according to the working of His mighty power 20 which He worked in Christ when He raised Him from the dead and seated Him at His right hand in the heavenly places, 21 far above all principality and power and might and dominion, and every name that is named, not only in this age but also in that which is to come. 22 And He put all things under His feet, and gave Him to be head over all things to the church, (NKJV) 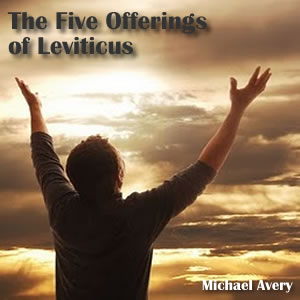 The 5 Offerings of Leviticus series : 5 x mp3s
The Five Offerings of Leviticus - Michael Avery ministers on the topic of sanctification, the Day of Atonement is before the Feast of Tabernacles and this must be kept by God's people, not by passed. Messages recorded at Kingdom Ministries Bendigo. Lampstand Communication Gospel of the Kingdom Mp3 files are available for immediate use after purchase - THIS IS A DIGITAL PRODUCT ONLY.
Price: 10.95 AUD
USD $7.67